On the eve of the first African screening of Carsten Höller’s 2015 film Fara Fara in Kinshasa, ART AFRICA spoke to the artist about his love affair with Congolese rumba

It was inside a nightclub in Benin that Carsten Höller first heard and fell in love with Congolese rumba, an ensemble-based music genre in which the guitar is key component. The German artist, who lives and works in Stockholm, had recently switched careers. Höller holds a doctoral degree in agricultural science and initially worked as a research entomologist until 1994. His often festive and participatory works shortly saw him associated with critic Nicolas Bourriaud’s idea of “relational aesthetics.” It is not hard to understand why. Höller has in the past worked with ferris wheels, merry-go-rounds and roller coasters. 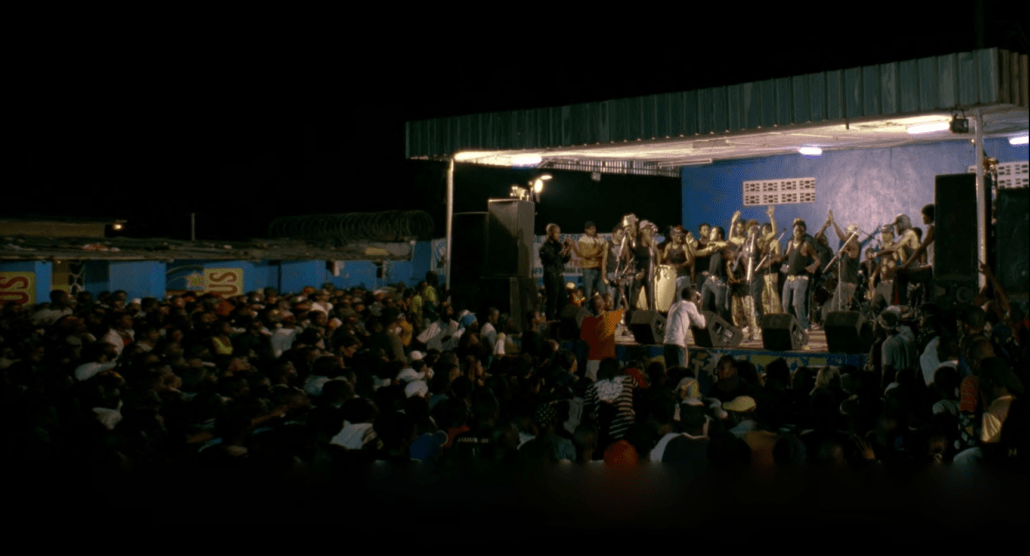 Still from Carsten Höller, Fara Fara. All images courtesy of the artist.

Höller’s large-scale installations are typically hands-on and immersive. Test Site (2006), staged in Tate Modern’s Turbine Hall, featured a series of giant slides. Congolese music has also featured as a component of this work. Staged in a London warehouse, The Double Club (2008–09) was a fully functioning bar-cum-nightclub that included a sonic component of Congolese music. Höller is a huge fan of Congolese rumba. His three-film series Flicker Films (2004–05) features Congolese bandleaders, Felix Wazekwa and Werrason – the films were shot using synchronised cameras, lending the films a quasi-holographic visual effect.

Höller’s work presumes some working knowledge of the history of popular music in the Democratic Republic of the Congo, although it is not essential. A synthesis of Cuban and local traditions, rumba was formalised in the 1940s and first achieved widespread regional popularity in the 1950s, notably through legendary bands like the Franco-fronted ensemble OK Jazz and rival outfit African Jazz, which included guitarist Nicolas “Docteur Nico” Kasanda and vocalist Tabu Ley Rochereau. Höller’s 13-minute film installation Fara Fara (2015) is a celebration of this storied genre.

Filmed in Kinshasa, Fara Fara describes an epic sound clash between two rival superstars. It draws on the genre’s rich mythology of jousts, such the 1980s face-to-face (fara-fara in Lingala) involving Papa Wemba and his protégé Kester Emeneya. Called “the king of rumba rock,” Wemba is one of three protagonists in Höller’s quasi-documentary film. The others are Werrason and Koffi Olomide. Fara Fara debuted on Okwui Enwezor’s stately if divisive exhibition All the World’s Futures at the 56th Venice Biennale in 2015. It has since been shown widely, but never in Africa – until very recently.

On the 30th of December 2019 Höller returned to Kinshasa to screen Fara Fara for a small audience. The film formed part of a programme of events that culminated in a performance by Blaise “Ingénieur” Bula, a former member of well-known 1980s rumba ensemble Wenge Musica, of which Werrason was also a member. Accompanying Höller was English musician and producer Jamie xx, who previously collaborated with influential jazz poet Gil Scott-Heron. What distinguished this small screening from previous versions elsewhere was its audience intimate familiarity with the subject, and the invention or lie at the heart of Höller’s film.

This is an edited transcript of an interview held a few hours before the one-off show.

Sean O’Toole: Let’s start with the making of Fara Fara.

Carsten Höller: When I decided to make a film about Congolese rumba I was faced with an immediate difficulty: I am not a filmmaker. I have no idea about making longer, well-produced films. I suppose one can learn this, but I thought I would find someone to collaborate with. I found this young Swedish film director, Måns Månsson. I’d recently seen a film he made in Czechoslovakia about a Swedish sports reporter, which was beautifully filmed. We met up and to my great surprise I found out he’d been to DRC many times. He’d lived there in the early 2000s while playing professional football in Kinshasa. He was the goalkeeper for a local club. We subsequently visited DRC many times together.

Yes, it is a film about a film that hasn’t been done yet. [Laughs] One thing I haven’t spoken about often is that Fara Fara was an experiment. We shot the material not knowing what we would do with it. Basically, Måns and I visited Kinshasa for camera tests with Hoyte van Hoytema, who had only made two Swedish feature films at the time but has subsequently gone on to become a legendary director of photography. We had a good energy together and filmed a few concerts. We also filmed a lot with Papa Wemba. I didn’t know how to use the material. What we ended up doing to make Fara Fara work was to subtitle it in a way that has nothing to do with what Papa Wemba is saying or singing.

Tonight, when we show Fara Fara in Kinshasa, it will be the first time that people who understand Lingala will be able to see Papa Wemba singing and talking about things. Fara Fara has been seen at the Venice Biennale, at the Hayward Gallery in London, and at the Pirelli HangarBicocca in Milan, and so far nobody has ever come up to me and said, “There’s something wrong with the subtitles.”

I love Woody Allen’s film What’s Up, Tiger Lily? (1966). It’s a Japanese action film that has an entirely different story overlaid onto it with the subtitles. It is beautiful. Fara Fara has this Situationist moment, a moment of détournement, but nobody has picked up on it when I previously showed the film. Maybe tonight people will finally appreciate the film for what it is: an artwork.

That fictional moment goes to a question I had after first seeing the film in Venice and subsequently reading interviews, as well as Elin Unnes’s essay in your book for the film. The one thing that still eludes me is whether the fara-fara contest in the film was staged or is entirely fictional, basically whether you’re a documentarian or if you set up this whole thing up? Your descriptions have always been very sketchy.

It is a bit sketchy, intentionally so. While doing the camera tests we got so excited at the beautiful things we filmed. But look, let me explain it this way. A fara-fara really exists.

It can happen. As I understand it right, it was a traditional way of the Luba people – even in pre-colonial times – to settle conflict between villages. Instead of fighting they used music. My idea for Fara Fara originally stemmed from an announcement of a fara-fara in Paris between Koffi Olomide and Werrason. This would have been around 2008 when I was preparing the Double Club in London. Fondazione Prada supported the project and I thought Miuccia Prada should see the fara-fara. She flew to Paris, but by the time she arrived it had been cancelled.

A fara-fara is almost like politics. If a fara-fara is announced, people get very excited. Everybody knows that it can be cancelled at the last minute, which itself becomes the source of debate afterwards. “Why did you cancel?” It is a very good promotional tool. It functions in ways that from a western perspective might be difficult to understand. It is all about talking. Fara Fara is made up of found material and scenes that we filmed. But the idea is still there, that it would be great making a real film, so to say, with a real fara-fara organised in Kinshasa. It’s not out of the room, but for the moment we have this intermediate product, Fara Fara.

In a 2016 interview, you spoke of your love for Congolese music, but also the sorrow of its absence in the western mainstream: “You don’t hear it on the radio, it’s not something people talk about. It feels segregated from our world.” Do you think initiatives like working with Jamie xx might create wider interest?

I think so, but I am not a missionary who wants everyone to listen to Congolese music. I don’t know how to explain it. It is basically inner voices telling me. It is not a rational thing.

It is part of my repertoire really. But it is not necessarily about Congolese music so much as a certain arousal, something that art can give you, something between astonishment and excitement. The ways of getting there can be manifold. I am critical about producing art objects and putting them everywhere and looking at them. I am really fed up with it. I think it is lame and tame. I think projects to do with music can be very powerful, especially if it is underground music, as in Mark’s case, or Congolese music. There is a certain force in it that seems more viable right now than the lame and tame art world that we are in.

Sean O’Toole is a writer and editor living in Cape Town, South Africa.