‘…when they grow up…’: Ebony G. Patterson at the Studio Museum Harlem, by Robin Scher

A physical frequency can be felt walking into Ebony G. Patterson’s on-site installation ‘…when they grow up…’ at the Studio Museum in Harlem. Maybe this feeling is a result of the hot pink, plush carpeting or the two hundred patterned, fabric covered balloons hanging from the roof? It could also be the sudden wave of nostalgia upon entering a room scattered with familiar childhood objects. On closer inspection, the static sensation might have to do with the carefully placed human subjects: blown-up photographs of black children within a brightly coloured collage. 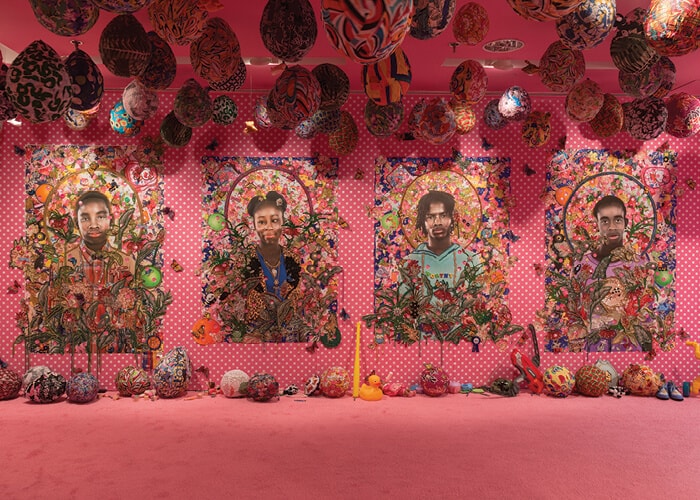 Ebony G. Patterson, installation view of ‘…when they grow up…’ Photograph: Adam Reich. All images courtesy of The Studio Museum, Harlem.

Patterson’s work is a response to the prevailing perception in America that, due to social conditions, children of colour are forced into premature adulthood. In this regard, ‘…when they grow up…’ attempts to reassert an innocence otherwise robbed by prevailing media narratives; the ones that offer a twisted rationale for the country’s high murder rates among African American youth. That is not to suggest that the installation skirts this all-too painful reality. Instead, Patterson overlays metaphorical visual strands into her intricate collage, loading her installation with embedded meaning. 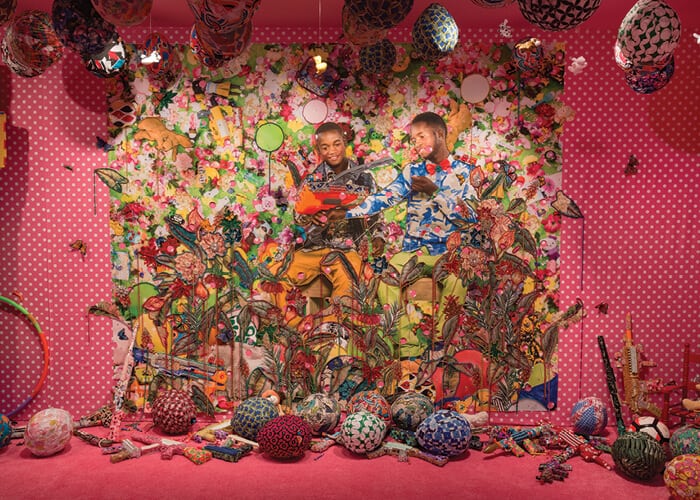 Take for instance . . . they were just boys (. . . when they grow up . . .) (2016). A pair of shoes sits beside a stack of colourful foam alphabet blocks. Alone, the shoes hold little bearing on the room. Alongside a scattering of green plastic army men, several toy guns and a photograph of two boys admiring a plastic crossbow, however, the discarded shoes suddenly take on a wealth of meaning. It’s no coincidence that the blocks, when rearranged, spell out the name ‘Tamir Rice,’ the twelve-year-old boy from Cleveland who was killed by police officers in 2014 after his toy gun was mistaken for a real weapon.

While this interpretation may seem overly direct, Patterson employs intricate layering to avoid such cliché. Prime among Patterson’s motifs is her use of creeping foliage and plastic bugs. Placed beside the more literal colorful scenes, this rather ominous juxtaposition hints at the ever-creeping presence of natural decay that threatens to engulf the smiling subject’s childhood at any moment. A similar device can be found in the holes piercing the photographs of the children, revealing the polka-dotted wallpaper that lies beyond. 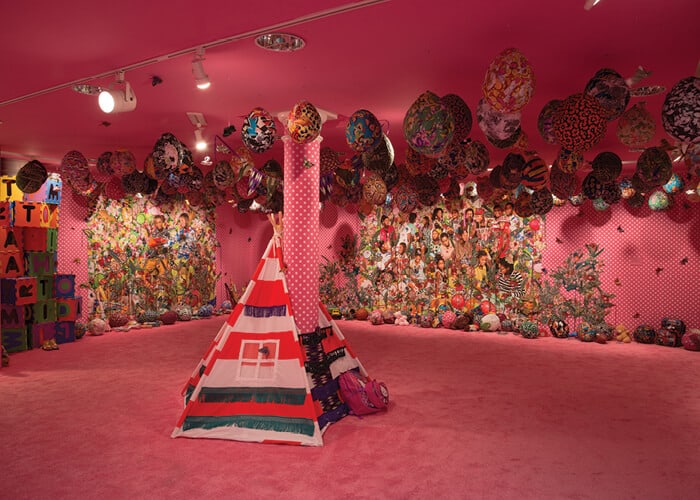 Ebony G. Patterson, installation view of ‘…when they grow up…’ Photograph: Adam Reich.

Strings of multicoloured beads and glittering ornaments also appear throughout the room, crisscrossing along almost every surface from the collages to the toy guns. Patterson’s inspiration here is rooted in a funeral practice from her native Jamaica, where coffins are bedecked with the same sort of ephemera. “That tradition grows out of communities who feel neglected,” Patterson explained in an artist statement from a 2014 performance that similarly incorporated this tradition.

The use of coloured beads in ‘…when they grow up…’ epitomises the installation’s intention. Together with all the other elements that engulf the room in bright colors and decoration, the beads act as an assertion. “There is a sense of authority in claiming visibility in a space that has deemed you unworthy of visibility,” Patterson recently said in an interview about the exhibit. “Like gold in illuminated manuscripts, bling creates the opportunity for illumination – it creates a moment of light.”

Perhaps it’s this “moment of light” that first confronts the viewer when entering the gallery space. In managing to achieve this moment, while directly confronting her subject matter, Patterson’s exhibition can be viewed as a work of beautiful melancholy; a glittering candle meant to illuminate the darkness.

Robin Scher is a New York-based cultural reporter, currently working as editorial assistant at ARTnews Magazine. His favourite room at the MoMA is Monet’s Water Lilies.