‘Widening The Circle, In the spirit of Mancoba:’ An Exhibition Review by Khehla Chepape Makgato 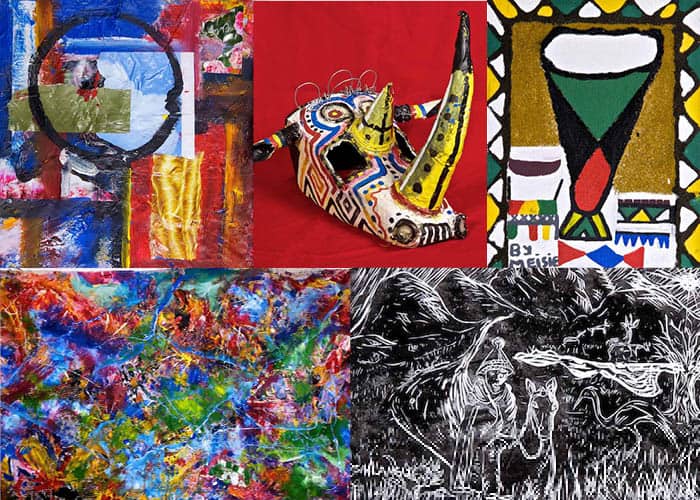 Mancoba spent many of his formative years in Polokwane, formerly Pietersburg, and even taught at Khaiso Secondary School. It is therefore fitting that the region should play host to a celebration of his legacy and, in so doing, widen his spirit of African Humanism to the people of the province by hosting a dedicated poster exhibition, titled ‘Widening The Circle, In the spirit of Mancoba.’

The touring exhibition is a result of the Ernest Mancoba Education Poster Project (EMEPP) and resembles a travelogue of South African culture, celebrating African art aesthetics and widening the ‘educate, develop and learn’ concept – a much needed model in developing arts education in South Africa. ‘Widening The Circle, In the spirit of Mancoba’ was initiated by the Arts & Ubuntu Trust and was first shown in Cape Town in 2012 at Annex Gallery IZIKO and thereafter moved to UNISA Art Gallery, Pretoria, in 2013. In 2014, Emthonjeni Art Centres in the Eastern Cape, William Humphrey’s Gallery in Kimberly and Durban Art Gallery followed suit by hosting the exhibition. 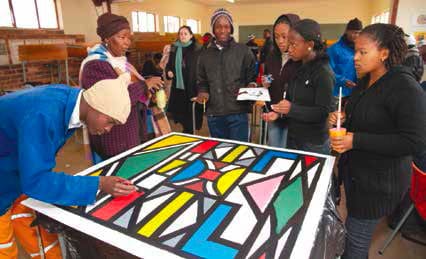 One cannot speak about Ernest Mancoba without mentioning the impact he has made on the international art landscape. We can echo the voice of British artist and activist Rasheed Araeen, in an essay reproduced by the Stevenson Gallery, in which he described Mancoba as one of the most important artists in any genealogy of African modernism: “[H]e is Africa’s most original modern artist, but, more importantly … he enters the space of modernism formed and perpetuated by the colonial myth of white racial supremacy and superiority… and demolishes it from within.”

Mancoba was born in 1904 in Boksburg, Johannesburg, the son of a mineworker, and was eventually sent to Polokwane to stay with his uncle, an Anglican minister, while gaining formal education at a missionary school. After graduating, Mancoba was hired as a language teacher at Grace Dieu school in 1924, and then Khaiso Secondary School from 1937. He made his famous sculpture, Bantu Madonna (also known as The Black Madonna), before he left the country for Paris in 1938. Nigerian art historian, Chika Okeke-Agulu would later describe these wooden sculptures as having “primal monumental simplicity.”

Mancoba once said, “I use the line without the problem of perspective in order to directly come to the point of my expression.” His vibrant colours and evocative figures were used to express his overarching belief that art is “a means to favour a greater consciousness in man, which…is part of the struggle for any human liberation.’’ Mancoba realised early on that the situation in South Africa was not fertile for his art to grow and prosper as his energy and talent would constantly be met with oppression by the apartheid regime. “At a certain moment one wants to have the emotional experiences instinctively expressed and not insisted upon,” Mancoba asserted. 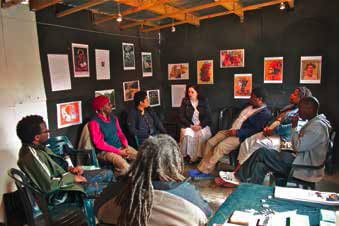 Mancoba was inspired by French art historian, Paul Guillaume’s book titled, Primitive Negro Sculpture. He ultimately found refuge in France, and briefly Denmark, where he could work freely without fear of persecution. During an interview with Hans Ulrich Obrist in Paris 2002, Mancoba said of his admiration for Guillaume’s work that “I begin to think how enriching it would be to have an exchange of ideas with such an open mind who spoke with such deep respect about the expression of Africans when I wasn’t even considered a full human being in my own country.”

Mancoba realised the importance of the arts collective and community art development. He later co-founded the highly influential art collective or movement called CoBrA, however his role as an active founding member received little or no attention by European art historians of the time. The CoBrA artists wanted to express unconscious fantasies and inhabit creative social circles where every member could benefit from each other’s intelligence. Rasheed Araeen asserts that the erasure of Mancoba is a result of racism and ethnocentrism.

‘Widening The Circle, In the spirit of Mancoba’ is a collaborative workshop-based exhibition that serves as an embodiment of Mancoba’s humility, charity of purpose and undying love for humanity. Those who love the community arts development are saddened by the fact that a universal South African born icon, the son of our soil, could not come back to enrich artistic excellence in his country of birth. However, his legacy continues to thrive and his vision is embraced by the likes of community arts developers, legendary artists and educators, such as the late Peter Clarke, along with Lionel Davis, Charles Nkosi, Avashoni Mainganye, Grace Tshikuvhe, Abdulkadir Said and many others who have participated in the Ernest Mancoba Education Poster Project (EMEPP) over the years. These are the community artists sharing their artistic profession with the community in a quest to offer them a freedom of expression and aesthetic experiences.

Talking about arts community workshops, the late Peter Clarke once told me, “Community art workshops are very important for society because they can make the members of that society pause, think, appreciate and find a way of supporting creative individuals around them.” Clarke believed that art education inhabits a separate space to institutionalised academia. He himself did not go far with formal education, but was able to distinguish himself as a prolific poet, artist, collagist, writer and arts activist.

To reference Paul De Bruyne & Pascal Gielen in their book, Art Community – The Politics of Trespassing; as far as the individual experience is concerned, every collective experience begins with individual experiences; people who already feel they belong to the community, or who get this feeling during an aesthetic event, will always have to be touched by a work of art before they share these experiences with others more or less consciously.

The exhibition itself features the overwhelming presence of Durban’s painted abstract works. There are also other noteworthy pieces from an Mpumalanga-based workshop conducted and led by legendary black female artists such as Mrs Esther Mahlangu. Meticulously painted in the tradition of Ndebele mural paintings, the paintings greet one with enchanting familiarity and cliché. These large frames are also accompanied by smaller adaptations made by students in the various workshops held as part of the project. According to Amos Letsoalo, senior curator at Polokwane Art Museum, “There is a sense of diversity and dynamism that runs through the show in a way that ties and explains the larger context and ambitions of the project. Such copious and almost perfectionist attention to detail is another way we can make sense of its investment in an on-going process.”

In his tribute to Mancoba, published by City Press in 2002, Thembe Ka Mathe wrote: “Mancoba was a surprise package. His oeuvre, dominated mostly by abstract African masks, went beyond the confines of simplistic label. The strength of his work was the strong spiritual aspect that was embedded in his mystical and sometimes abstract works. The abstraction in his works shows he did not only relate to day-to-day events but went beyond that.” In 2011, Mikael Andersen of the Mikael Anderson Gallery in Denmark, admired Mancoba’s use of the abstract figure “as an expressive messenger.”

Ernest Mancoba died on the 25th October 2002 in Paris, France, at the age of 98. His legacy continues to inspire contemporary South African artists.

‘Widening The Circle, In the spirit of Mancoba’ Poster Exhibition ran from April – July 2015 at the Polokwane Art Museum in Polokwane, Limpopo.