Watch South Africa’s most celebrated artist, filmmaker and performer William Kentridge talk candidly about ‘his’ South Africa in 21 Icons, this Sunday 3 November on SABC3 at 18h57.

21 Icons South Africa, is a celebratory look at this country’s icons, those men and women who have inspired us and continue to do so in a way that makes us think about the remarkable journey we have taken as a nation, from suppression to democracy. 21 Icons – a concept lead by photographer Adrian Steirn and his talented team – depicts these South African ‘heroes’ through a series of short films and portraits, which ultimately capture their incredible spirits.

Having already witnessed the fascinating narratives of 14 icons, from world famous politicians and musicians like Nelson Mandela and Johnny Clegg to sports heroes such as Gary Player, it is Kentridge’ s turn to be revered in black and white celluloid and print. Steirn shot the artist with a single ten-second exposure, capturing the icon in his studio three times, paying tribute to the multimedia nature of his work for which he his is famed. “The thing that one has to understand is that if you’re the subject of a portrait you’ll rarely like it,” says Kentridge when he is interviewed by Steirn. “Technically though I’m extremely impressed with how simply and well a triple exposure works. It’s similar to work that I’m interested in, but it is very nice to see it being done at a very different technical level and with a very different skill and achievement of doing it.”

Kentridge was born into the struggle to parents who were anti-apartheid lawyers. He reminisces to Steirn, “I have memories of the mulberry tree in the garden where I grew up, the taste of a white cape peach in the summers and the beach at Plettenberg Bay.” He also remembers the shock of opening, what he thought was a yellow box of chocolates but was in fact a Kodak box containing 8×10 glossy black and white photographs of the people who had been shot at Sharpeville. “My father had them in his office as he was representing the families of the people shot in the massacre. It was quite a transformation of how the world occupies, from expecting the chocolate to finding an exit wound of someone with their chest blown up.” 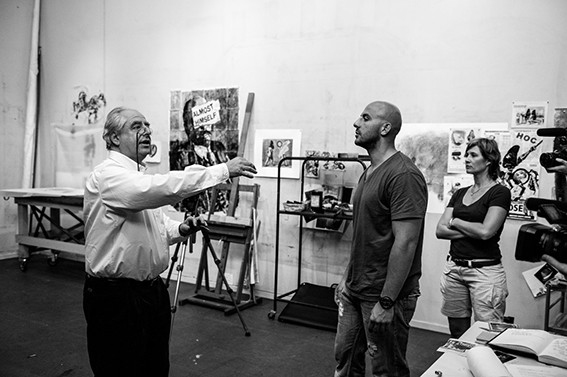 So, he learnt at an early age to question structural impositions, which steered him towards attaining a degree in Politics and African Studies at the University of the Witwatersrand in 1976. He then went on to study art at the Johannesburg Art Foundation, in 1978, after which he gained experience in the film arena working as a set designer for various productions. He also taught design printing until he moved to Paris in 1981, where he studied drama at the famous École Jacques LeCoq.

Since the 90s, Kentridge has made films about the end of the Apartheid system, the first elections and the powerful work of the Truth and Reconciliation Commission, in which he constantly highlights the complex situation, which best describes a post-apartheid South Africa. And while the famous artist is known for his work in film and drawing, he is just as prolific on the theatre scene.

Like all the portraits of the individuals in the 21 Icons South Africa series, Kentridge’ s signed portrait will be auctioned at the end of the series and the proceeds donated to the charity of his choice.

21 Icons South Africa is proudly sponsored by Mercedes-Benz South Africa, Nikon and Deloitte and supported by The Department of Arts & Culture as a nation-building initiative.