The world of nonsense and imagination found in Carroll’s novel allows Cruise to use her materially conscious language of reduced forms and redirected symbols to offer oblique commentary on homogenised culture. Inspired also by poststructuralist feminist theory, Cruise employs the language of the self or the internal to question broader societal concerns, particularly the hierarchical relationship between animals and humans.
The exhibition comprises two distinctive types of work. Works on paper, in the bottom space, relate quite closely to the original text. They read as a display of her process of consuming and digesting the text and introduce the viewer to motifs and themes that form part of the larger exhibition. The Alice Diaries consists of an installation of thirty-three pages of preparatory work where the artist has recorded quotes, drawn doodles and made observations on the novel. Motifs of infants and animals are made apparent by the series of monotypes entitled, ‘Baby Series’, mixed-media illustration such as The Dog and the sculpture, The Travelers.

On the way to the top space of the gallery, a small anthropomorphic baboon figure meditatively dangles its feet in the water feature. The quiet, dreamy quality of this sculpture is interrupted when the viewer reaches the top exhibition space and is met by a small, armless, amorphous human figure – about waist height – with what appears to be a scorched, dead baby on its head. On entry of the main installation it becomes apparent that Cruise has reread the dream world of Wonderland as a nightmare. One is confronted by an ocean of dead, deformed, aborted, or discarded ceramic babies. The baboon figure recurs, but this time it is dangling its feet in the stream of babies, a poignant juxtaposition to its previous incarnation. Instead of being just whimsical nonsense, the quotes written on the gallery wall make visible a threatening madness, the horrific reality of Alice’s experience in Wonderland. The raw wasteland of exposed, abandoned babies captures the frightening vulnerability of the Alice character as she wonders through this world alone. 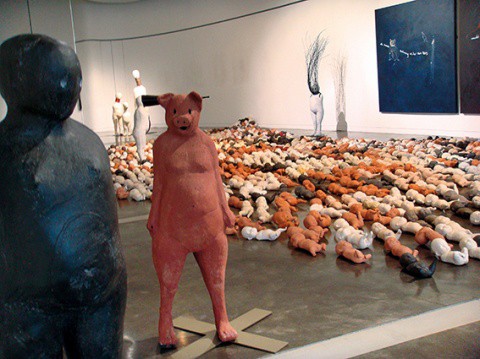 Alice, however, is not alone, but pulled and guided by the animals in Wonderland. So too the flow of babies in Cruise’s installation are accompanied by anthropomorphic and archetypal figures that appear to supervise, control and direct the passage of babies. Some characters look derived from the text and others are recognisable from Cruise’s existing oeuvre. The Three Alices, a self-portrait, for instance, keeps watch from further away.

Cruise has made the viewer a distant observer of the disturbing scene through the choice of small sculptures and by diverting the gaze towards the floor of Circa rather than the walls. This “god-perspective” allows the viewer to reflect on the possible hierarchical relations between figures. Cruise suggests that her work is a parable about human-animal interactions and there is no doubt that her near-apocalyptic imagery is consistent with an activist stance that is deeply humanist in its expression.  Nicole Lindeque is an artist based in Johannesburg.