WRITINGS ON THE WALL: In Conversation with Dion Cupido

in FEATURE, GRAFFITI, INTERVIEW, MIXED MEDIA, PAINTING, VISUAL CULTURE
Share on facebook
Share on twitter
Share on email
Share on whatsapp
ART AFRICA had the opportunity to sit down with Dion Cupido and discuss his recent body of work.
“When I look at graffiti; tagging, writing your mind on the wall, there’s something really beautiful about it. I like the idea of writing on the back of toilet doors. I find it so interesting. It’s these peoples’ lives, on walls and behind doors, you know.” 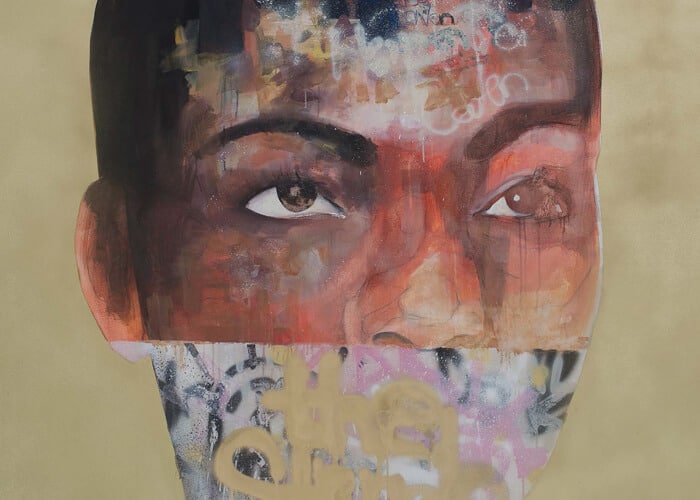 ART AFRICA: Did you grow up here, in Kensington, Cape Town?

Dion Cupido: I grew up in Mitchells Plain. I spent most of my years there and moved out with my parents when I was nineteen. We moved to Parow, so that was a complete culture shock for me; looking out my window and checking a white dude on a bicycle riding past! At that point I had ideas in my head, dreams, but being an artist was not something that I even considered. I wasn’t thinking about careers back then. I was too busy having fun, thinking about casual jobs. My uncle David Sol used to do art classes and he’s always been involved in the arts in some way. He noticed that I had the ability and tried to nurture it.

What type of work were you producing?

I was drawn to Abstraction. When I first started painting portraiture it felt too easy, like I could do nothing with it – I’m just going to copy someone’s face and that would be it. When I eventually started adding the marks to it and started adding other influences like graffiti, it became something more than just a portrait. When I was younger I used to read up a lot about all the masters. I was in awe of the things they were doing and it was all new to me, but as a youngster you are in the now, and you’re affected by the trends that are happening, so graffiti was something that was new on the scene, hip-hop culture was new. I was part of that. 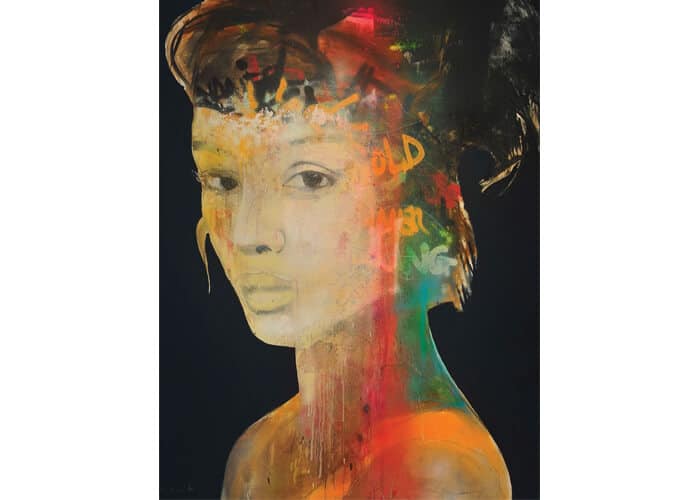 And the subjects of your work?

Somebody asked me the question “Why do I paint females?” It’s an emotional thing I suppose – there’s an instinct to what I do, a flow. I found that painting portraits of females was a way for me to deal with my issues as a male and how I relate to females. A lot of people read the graffiti as a way of vandalising the female – they see a violence in my mark-making – but I don’t see it that way. It’s never been that for me. When I look at graffiti; tagging, writing your mind on the wall, there’s something really beautiful about it. I like the idea of writing on the back of toilet doors. I find it so interesting. It’s these peoples’ lives, on walls and behind doors, you know. So I suppose it’s me scribbling out how I feel, especially about that kind of thing. I have a psychologist. She’s pretty sure I’m dealing with my mommy issues you know [laughs]. I think some of it is that – that love/hate relationship.

A lot of these images are drawn from the internet. Do you spend a lot of time on a computer?

A fair amount. For an artist growing up in South Africa, there are very few places you can go to see art, beside the National Gallery. I didn’t go to art school, I’m self-taught, so there is a lot of ignorance to the way I think about art. I found my education through books and magazines. I didn’t get to see real paintings much in Mitchells Plain. The internet is where we see what we see, so that relationship has continued. I sit on the computer, and am bombarded with images all the time. I’m not the first artist to look at that, but it’s what I love – especially this idea of sex. As a guy those things are put out there and that’s what you see. I don’t see the guy standing next to the women in the Armani advert, I see the beautiful women standing next to him. I think there are a lot of issues around sex, especially when it comes to guys. Part of that we just have to accept. 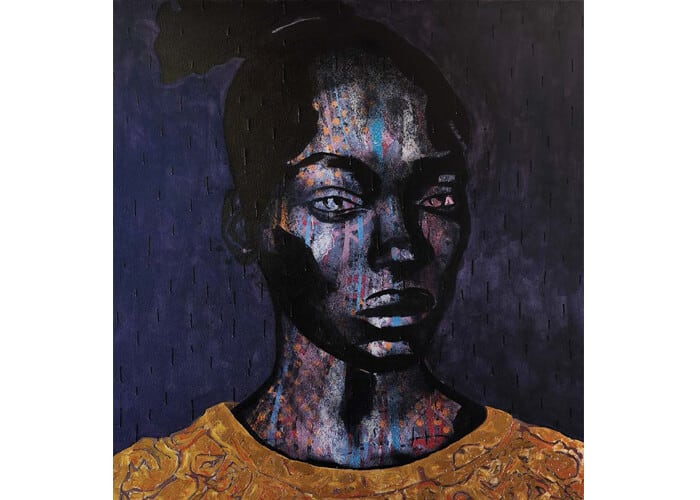 How have your portraits changed over time, and how much of it is through experimentation?

I’m restless. I change ideas all the time. I started doing abstract painting, then I was painting urban landscapes, then it was movies – I was jumping around a lot, just to learn. They want you in a box, which you can understand. In the current art climate, everything is about multi-media works and you want to be relevant, so do you go there as a painter? I don’t know, it’s difficult. Do you make the painting work for you, or do you have something else to say beside painting?

I guess once you start to develop a following there is a lot of pressure to keep producing what is expected?

There’s a lot of pressure, especially if you’re selling. I’ve always felt a bit trapped by it, but that’s my reality – the reality of wanting to be an artist. If you’re married and have kids, what do you do? It’s about survival. In my early days I was more of a hustler than an artist. I did what I needed to put food on the table. I know that doesn’t fit into the ‘ideal’ art world but I guarantee you there are a lot of artists out there that share that point of view. For artists that found their niche early on, part of holding onto that is maintaining your lifestyle and its real – you produce works to sell – you can’t tell me you’re not trying to get works sold, whether it’s installation or whatever, you’ve got to maintain. Some people are just more eloquent when it comes to expressing the conceptual side of what they’re doing. That has never been as clear for me because I work from an emotional point of view, where I’m working out my issues, working out my thoughts. I find I daydream when I paint. There’s something automatic happening, and I let it happen, instead of making it happen. 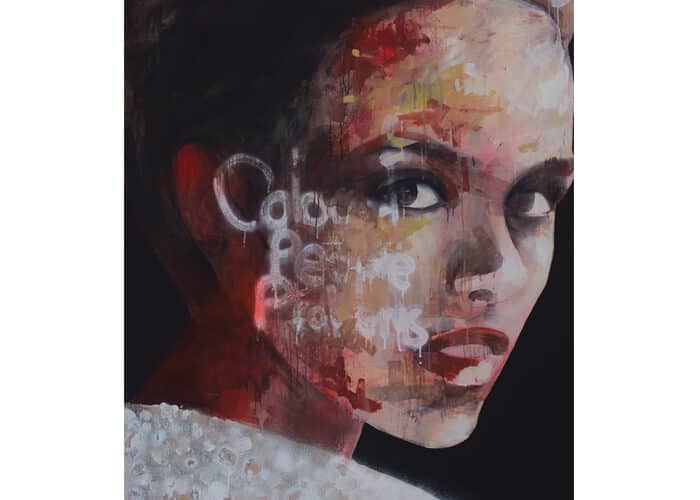 I’m interested in the therapeutic aspect of your work. You have a background idea of what you’re doing when you start out, but the process itself seems to be the most important aspect for you?

It is. I start with an image that I’ve found on the internet, in a magazine, or something that I took myself, but the work is not about the subject or the sitter, it’s about me. Sometimes I come into studio and I’m wound up, I have things going on in my head. As I’m painting I’m writing things that have an effect on my daily life; whether its finances, family… It has to do with something or the other, and the more you write the more you realise that certain things come up over and over, even if you can’t read what’s being said. I put everything on the canvas. It’s like a wall; it gets graffiti’d on, painted over, graffiti’d on… Walls have a history of people sharing their ideas, and that’s something that I love. I love the fact that we’ve been writing on walls since time began. That should never change.

You recently started working with sculpture too. Why?

I have three cement sculptures in mind, but I might do more. I will end up breaking it up and sticking wire in, where you can see it coming out. It reminds me of when I grew up, of what our backyards looked like; sand, these council walls and grey cement slabs. We used to go hunting for snakes and all kinds of things in the bush and the hills around Mitchells Plain. We’d often find these things under slabs or broken down walls. There’s something about the colour of cement that reminds me of Mitchells Plain so I like the idea of it being a very raw, beginner material, but the same material that gets used for lavish homes.

It’s also quite an experience learning more about the face through sculpture. I never really paid that much attention to the anatomy of the face before. It was just ‘shade,’ you know; the nose is in the middle of the face, basic stuff. Now there’s a lot that I’m taking note of through the sculptures, which will feed back into my paintings. It’s a direction I want to explore more in the future.

Dion Cupido’s fourth solo exhibition, titled ‘Plain reality’, will be on show at Worldart Gallery from 2nd to 30th March 2017.