Yellow is the Colour of Water

On the top floor of an incomplete one-storey building, portraits of Ghanaians – mostly females sitting among yellow jerry cans – hang on the unpainted walls. Others hang on abandoned scaffolds left in the building. These paintings are new artworks by contemporary Ghanaian artist Jeremiah Quarshie, some of which appear a bit exaggerated; but the near realness of Quarshie’s application is a testimony to the ‘hyper-real.’ 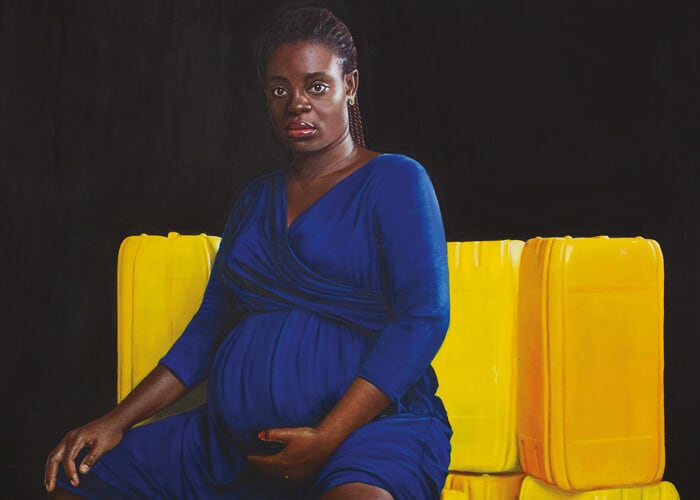 Held at Gallery1957 in Accra, ‘Yellow is the Colour of Water’ provokes a conversation about how the lack or inadequacy of water in Ghana affects Ghanaians from different sectors of society. His narratives draw attention to the scantiness of water, a national problem that has created a common conversation amongst Ghanaians, regardless of the socio-economic class that they belong. 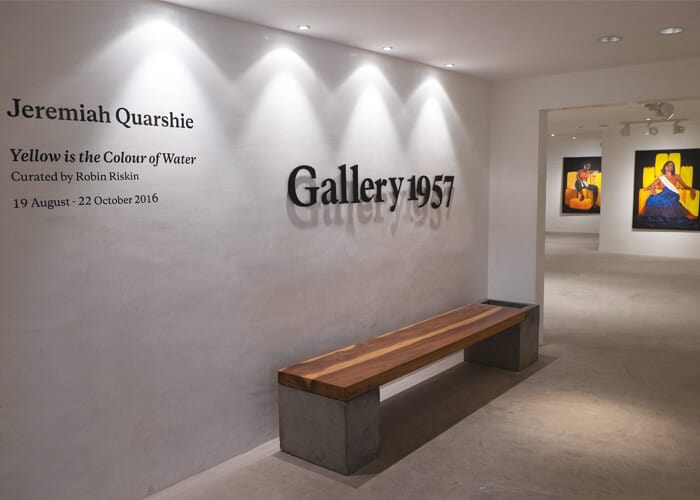 Installation view of Jeremiah Quarshie’s ‘Yellow is the Colour of Water’ at Gallery1957, Accra.

The politics associated with the water crisis in Ghana has been explored by many Ghanian artists in various ways, but the similarity normally falls on the material – the yellow jerry cans that have become ubiquitous in Ghanaian homes, hence the title of the exhibition. Serge Attukwei Clottey, whose artwork is popularly known to be associated with this material, creates detailed hanging sculptures made from these yellow plastic containers. Attukwei cuts them into parallelograms and sews them into a quilt- like conglomeration. According to Attukwei, the material, which is also associated with family history, has now become a necessity because the leaders failed to tackle the water crisis. As Quarshie points out in an interview with blouinartinfo, these containers are symbols, “both for failure and also for hope: The more gallons you have, then you’re sure that you’re OK, you’re safe.”
Known as “Kufuor” gallons – named after John Kufuor, the second President of the Fourth Republic of Ghana – the jerry cans are historically linked to the serious water crisis that arose in Accra during his tenure. Manufactured in Europe, these containers are brought to Ghana as cooking oil canisters. They are then repurposed to store water and petrol. “When I started looking at the object of the gallons, I saw all these contradictions,” Quarshie explained to Charlotte Jansen of Artsy, contradictions most prevalent “in their shared and shifting ownerships, their network of class relations, their repurposing.” 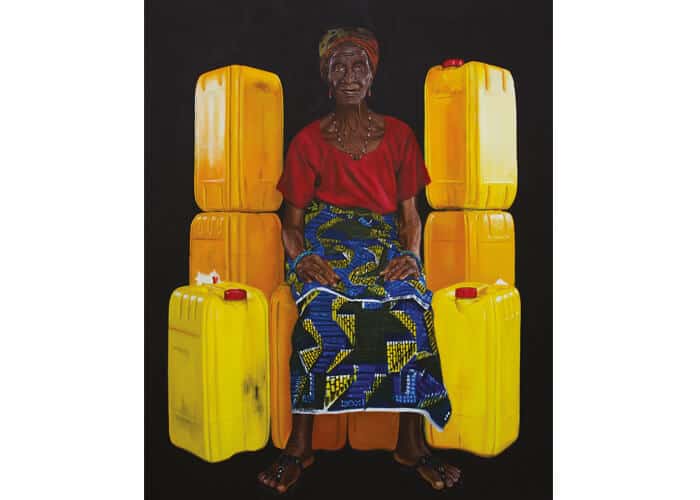 As an artist whose works are usually a presentation of his opinion of certain socio-economic trends in his country, he has created works that have interrogated the politics of global capitalism, its influence and intersection with local habits and day- to-day lifestyles, evidenced in his portraits of market women using smartphones and his paintings of famous figures, including Nelson Mandela, Oprah Winfrey, and footballer Michael Essien.


In the makeshift gallery on the premises of the Kempinski Hotel Gold Coast City, Quarshie’s almost realistic, and a bit exaggerated paintings of women form a cross-section of the Ghanaian society, seated on well arranged, throne-like gallons, orderly scattered in all the chambers. To the artist, the representation of women from diverse cultural and socio-economic backgrounds is a way to further explore the interconnecting differences in culture and life. The paintings include celebrity actress Ama K. Abebrese, his ninety year old grandmother, market women friends and civil servants. On the issue of using only women in his portraits, Jeremiah says, “traditionally they are the ones who go looking for water… It always looks like African women carry a certain magnitude of strength.” The artist’s response to using only females could be considered vague because gender roles have shifted over the past two decades. 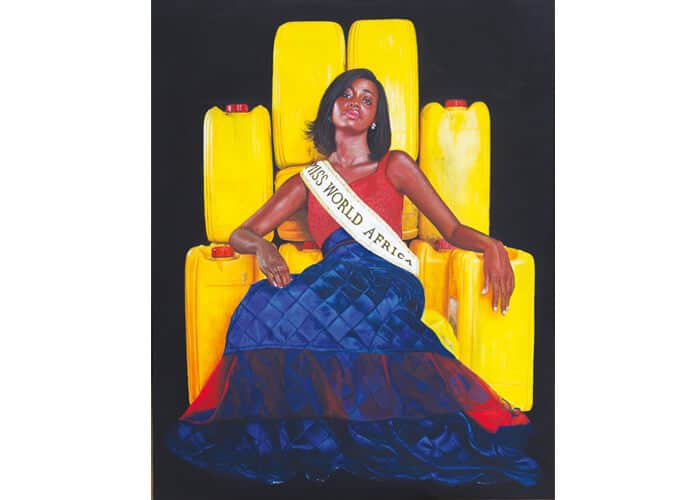 As her first solo curatorial project, Robin Riskin says: “The exhibition aims to take painting as a political project, and the exhibition structure as grounds for inquiry and interrogation.” On a more critical note, although the artist may have viewed the representation of women from different social classes as the best way to explore the water crisis in Ghana, the reality is that upper-class citizens are more removed from the crisis than their low-and-middle income contemporaries. The similar staging of Ama K. Abebrese’s portrait to that of a fishmonger only romanticizes the issue at hand, and so it could be seen as a sympathetic gesture towards the fishmonger. She might not have a direct engagement with these materials.

On the subject of using only women for the portraits, the artist’s explanation could be considered as vague, or a way to escape the fact that he was only concerned about the appealing aesthetic the women add to the portraits. Apart from Jeremiah Quarshie’s aesthetizing the water crisis with his “hyper-realistic” portraits, ‘Yellow is the Colour of Water’ is a project that adds to the conversation of governments failing to provide flowing water to Ghanaian homes.

Nana Osei Kwadwo is a freelance writer and an art blogger based in Accra. His @ashantiimmigrant instagram page is one of the most influential contemporary art pages in Ghana.